History of tuna fishing
One of the most interesting facts about the tunas is that these fish have been important to the life of man from the earliest times.  The ancient peoples of the Mediterranean prized the tuna immensely. From the strait of Gibraltar in the west to the Black Sea in the East, this fish was hunted and consumed in earnest. Greeks from the classical period onward were crazy about fish.  Among the thousands of fish which the Greeks harvested, bluefin tuna  was the most valuable and considered superior to all other fish, due to bluefin's awesome size and the extraordinary quality of its meat.

The ancients, delighted with its taste,  wrote about tuna, drew pictures of tuna, and inscribed their images on coins. This delicacy inspired poets and playwrights,  and even served as sacrificial offerings to the gods themselves. One of the earliest references to its attractive flavor comes from the poet Hipponax of Ephesus (sixth-century BCE), who wrote a poem about a man who literally wasted his life by luxuriously overindulging in tuna with a savory sauce. Greek served tuna in many forms - as grilled slice (temakhos), dried, salted, pickled, ... and they especially esteemed the belly-pieces of tuna. 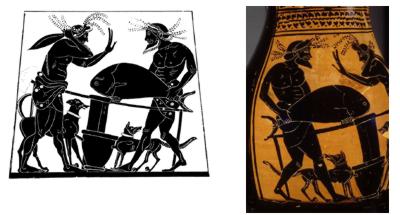 The Greeks  have incorporated tuna not only into their diets, but also into their poetry, music and culture. They wrote about tuna, drew pictures of tuna, and inscribed their images on coins.
Not many painted or sculpted images of tuna survive from the ancient Mediterranean world, with the exception of a few vase paintings, and the coinage of Gades (near the Pillars of Heracles - Strait of Gibraltar), and Cyzicus (at the entrance to the Black Sea). It is not surprising that these two areas were the most well-known for tuna fishing wealth. The citizens of these states at opposite ends of the Mediterranean paid tribute to their natural resource by putting images of tuna upon their coins. Tuna became their badge. The Punic people of Gades in Spain (modern Cadiz), minted coins with the head of Melqart (the Phoenician god) on the obverse, and images of tuna on the reverse. The Greek state of Cyzicus in the Propontis (Sea of Marmara), however, holds the title of 'Tuna Coinage King.' 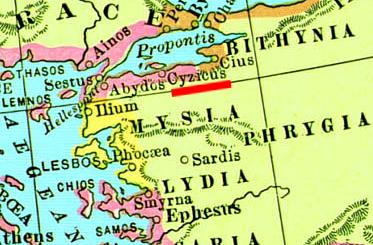 Map of the Aegean world c. 800-600 BC, at the time Lydian and Mysian coins were minted. In fact, that coins were the world's first true coin. 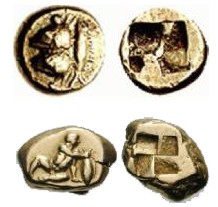 Coins from Cyzicus - Cyzicenes, as they were soon called, were almost universal currency in ancient world. To see more coins click on the picture above.

Great shoals of tuna used to migrate in and out of the Black Sea, which the Greeks called the Pontus Euxinus - the Hospitable Sea. Aristotle in the fourth century BCE wrote: "Tunnies, pelamyds and bonitos enter the Pontus in spring and spend the summer there, and so do practically the majority of the shoaling fishes."  Aristotle and others carefully observed these migrations in the narrow channels of the Propontus (Sea of Marmara), not just because they were scientifically curious, but also because accurate knowledge of fish migration led to rich fish harvests. They carefully observed their migrations, in order to be able to trap them in the narrow straits of the Sea of Marmara. The area around Bosphorus and Hellespont (Strait of Dardanelles) was paradise for ancient fishermen, since it was easy to set trap for shoals of bluefin tuna, constructed of large fishing nets. To red more about tuna hunting through history click here.

Poseidon, patron of the fishermen

Poseidon, as the god of the sea, held great power and significance for the ancient Greeks. He was patron god of sailors and fishermen, whom seafarers and fishermen prayed to, when they went out to sea.  The tuna fishermen prayed for a good season, prayed for  an abundant catch, for successful pursuit of the tuna and consecrated tuna offering to him in his temples. To read more click here.

Bluefin tuna trap fishing in the Strait of Gibraltar


Another city, also well known for tuna fishing, Gadir (Cadiz in modern Spain), existed on the opposite side of the Mediterranean, far from Cyzikus and Byzantium. It was a wealthy Phoenician city located on the Atlantic coast in southwestern Spain, near the Strait of Gibraltar. Cadiz is the oldest continuously-inhabited city in the Iberian Peninsula and possibly the most ancient city still standing in Western Europe. The city was originally founded as Gadir (Phoenician "walled city") by the Phoenicians, in 1104 BC.  Later, the Greeks knew the city as Gadira or Gadeira. In Latin, the city was known as Gades.

Bluefin tuna fishing has existed in the Straits of Gibraltar since Phoenician times. Tuna fisheries are among oldest in the world with Phoenician trap fisheries for bluefin tuna operating in Mediterranean around 2000 BC.  Well before 1000 BC  the seafaring Phoenicians, the greatest traders of their time, were moving beyond the Strait of Gibraltar and navigated some distance southward along Africa's Atlantic coast. The Phoenicians circumnavigated Africa in 600 BC. Two thousand years after the Phoenicians, the first European known to have rounded southern Africa was a Portuguese navigator, Bartolomeu Dias.

The Phoenicians controlled the Strait of Gibraltar and trapped tunas by fishing nets during their migration from Atlantic to the Mediterranean sea. During April and May bluefin tuna migrate to the Mediterranean Sea through the Straits of Gibraltar to lay their eggs (to spawn),  following their internal radar with ancient instincts. The citizens of Gades paid tribute to their natural resource by putting images of tuna upon their coins.

The Punic people of Gades in Spain (modern Cadiz), minted coins with the head of Melqart (the Phoenician god) on the obverse, and images of tuna on the reverse. One of the Gadir  notable features during antiquity was the temple dedicated to the Phoenician god Melqart. In Greek, he was identified with divine hero Heracles (in Rome and the modern West, he is known as Hercules). Some historians believe that the columns of this temple were the origin of the myth of the pillars of Hercules.

Statues from the Temple of Melqart in Cadiz 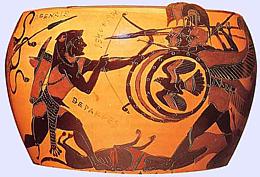