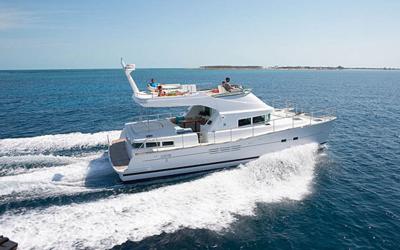 BACK TO LAGOON POWER 44 MAIN PAGE

You probably think that this floating villa accelerate like a turtle, but actually Lagoon Power 44 accelerate better than many monohull powerboats with narrower beam and much stronger engines. The LP 44 boat feels light and responsive. Lagoon Power 44 has the ability to accelerate quickly and jump up when you decide to put the coals to it. Those slim power cat hulls don't have much drag, so throttle response is much quicker than you'd expect on a single-hull boat. Until you get used to this, treat the throttles with respect.

More and more skippers are discovering that Lagoon Power 44 offers something that seems impossible: more space for a given length, more speed and less fuel consumption. In spite of fuel price increases, the Lagoon 44 with her low fuel consumption makes motor boating realistic.

Let's Take a Look at the Fuel Graph It's easy to see why Lagoon Power 44 is a popular choice among those who take cruising seriously. With the twin 310 HP diesel engines, the LP 44 is both quick and amazingly economical. Right across the fuel range, at all speeds compared, the Lagoon Power 44 is using less fuel than Regal 4260. As can be seen from the graph, at speed between 10 knots and 18 knots the Lagoon 44 is using, on average, only 55% of the fuel of the monohull powerboat Regal 4260. Below 10 knots fuel efficiency of the LP44 is even better. Lagoon is burning only 43% of the Regal 4260's fuel. This means, of course, much longer range for the Lagoon 44 at any given speed.

Due to expanded fuel tanks and low fuel consumption, Lagoon Power 44 has greater cruising range than any other single-hull motor yacht of the similar size. The Lagoon Power 44 provides one of the largest fuel capacities in its class. This 13,04 m beauty with an overall beam of 6,42 m has a fuel capacity of 1500 L. Large fuel tanks, speed and fuel efficiency make one heck of a combination.

With its tremendous cruising range and low fuel consumption, Lagoon Power 44 is the nautical equivalent of a camel.

The figure above shows one more advantage of Lagoon catamaran - speed can be reduced to a slower cruise speed for a greatly increased range. If we look at 10 knots, for example, the Lagoon 44 catamaran has impressive cruising range of 650+ NM (Regal range at 10 KT is 220 NM).  To further increase her range, the Lagoon cat could decrease her speed to 8 knots, at this point she would have amazing cruising range of 1300 NM (Regal range at 8 KT is 350 NM). As we said before, at speed of 8 - 10 KT LP 44 is using only 43% of the fuel of the Regal 4260 powerboat. For a given amount of fuel this means more than twice the range! Since Lagoon 44 cat has a bigger tanks than Regal (1500 L vs. 1150 L) cruising range of Lagoon 44, at lower speed, is actually three times longer than Regal range! So, Lagoon Power 44 is smart choice for long range live aboard cruising.

This all confirm that Lagoon Power 44 catamaran is the ideal cruising power boat, capable of both high top speeds and extended cruising ranges that cannot be matched by any monohull boat. To our guests this equates to lower fuel costs and more time spent on holiday and less time passage making which should keep everybody happy!

We offer you great discount on motor yachts, sailboats and catamarans as the part of our special offer, which includes last minute deals, early booking deals and various promotional offers. Below you will find the links that will take you to last minute offer and special offer pages. Contact us for more information. We will be glad to offer you the best possible offer for your charter holiday in Croatia.

You can contact us by e-mail, fax, online booking form or phone - specify type of boat, dates & other details, and after receiving your enquiry we will inform you about boat availability, current prices, discounts, etc.